The starting point of the group show Over the Edges (2000) is the notion of corner. The curator of the show Jan Hoet wanted to highlight the corners of the city as structural accents. In the old city centre of Ghent, the corners of streets and houses function as reference points in the orientation of the city, but they also represent the boundary between interior and exterior, between indoors and outdoors, between private and public.
Facing the challenge of the exhibition, López-Menchero walked around the city in order to find a proper spot to intervene, but, due to its impressive scale, he came back to his body as basic unit of measurement to relate to the world. He joined his hands in front of his mouth, formed a 90 degree corner and spaced slightly them out. Immediately, he recalled Tarzan and related this popular character to his aim to reach in real time as many Ghent citizens as possible.
Both inspired by his body and the Hollywood star Johnny Weissmüller, López-Menchero installed three monumental painted billboards of the actor along the streets of Ghent and played the famous scream, better known as the ’Tarzan call’. This universally recognizable cry sounded out from eight different towers across the centre of Ghent at regular intervals to disturb the public peace of the urban jungle.
This video is a documentation of the first extensive intervention of the artist in the public space. 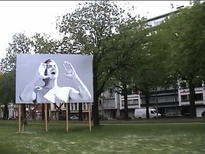 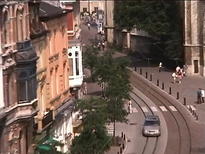 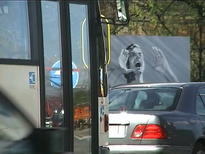