After his first appearance in M. el gigante (2007), the giant M. becomes a trojan horse and helped Emilio López-Menchero and his technical crew to enter the CIB (Centrum voor illegalen te Brugge), a centre for illegal immigrants in Bruges, Belgium. Invited to participate to the exhibition Indonésie! at De Bond (22.02.2008 – 05.04.2008, Bruges), the artist wanted to develop a project in order to meet Madé, a Bali citizen who was imprisoned at CIB because her documents weren't in order yet while she entered Belgium together with some French friends. M. walks around the city and asks to the tourists if they have the same kind of traditional character in their culture. Thanks to the excuse to entertain CIB inhabitants, the giant enters CIB and asks the same question to them, but while outside the artist could film the faces of the tourists, inside he had to merely be satified with footages of the inhabitants feet. The answers reveal different personal memories, antithetical feelings and talks depending if the stories are told by inhabitants and the tourists. At the end, the final edit of the video INSIDE /OUTSIDE – Brugge has been partly censured due to security raisons, but also because the uncensored footages show, the gates, the fences and the barbed wires of CIB while an European Law forbids to assimilate centre like CIB to prison. 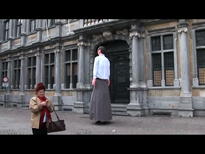 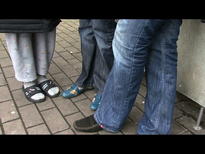 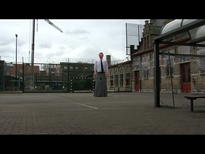