The autobiographical film ‘Home Movies’ reveals the psychological circuit that Acconci weaves into many of his works. It is a meta-document in which Acconci presents his work in chronological order from 1969. Seated in the dark with his back to the cameral and his face to the screen, he projects slides of earlier works. He describes each work in brief, while at moments looking to the side to direct his words to a person positioned outside the frame of the image. Speaking in a conspiring tone, he makes the person into his ally, an individual who finds himself in a privileged position with respect to the viewer: “They couldn’t possibly know these pieces the way you do... you know how I took what was happening with us and transferred it into the work.” Thereby Acconci turns the viewer into a voyeur; it is as if we are eavesdropping on a private conversation, a one-sided dialogue about the personal psychology behind Acconci’s work. At other moments Acconci places himself in the image full-frontal, directs himself straight at the viewer and clarifies his work methods, including the making of ‘Home Movies’: “There’s too much action here, my interest is language. Language can over-analyse things, break things down, over-complicate things.” At the moment the artist speaks to the viewer he breaks the intimacy that characterises the other sequences. He also questions this, literally: “There’s too much past here, past history. It’s about having a past base on which to structure a present relationship.” 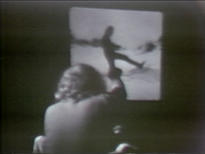