Since the 1970s, the Belgian artist and performer Ria Pacquée (b. 1954) has recorded her presence in this world, or rather disguised herself as a specific persona. Lately, Pacquée has turned the camera towards the ‘outside’ world. Here as well, she deals with everyday life, embracing all that is encompassed by it, including what may be seen as relative, as left-out or even as odd. In the series RESTING, TEXT and GROUP, Pacquée transferred slides and photographs to video. TEXT is made up of announcements, graffiti, brand names and random texts the artist gathered in different parts of the world and in a wide range of languages, while RESTING and GROUP features images of people resting or various crowds, photographed in different parts of Belgium and the world. Together these hundreds of ‘stolen moments and signs’ constitute a touching, often humorous and sometimes absurd mosaic of daily life and human activities. 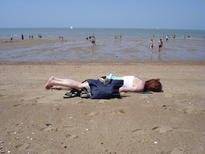 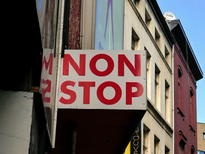 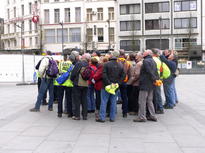