The artistic style of Etienne Elias is very wide and it has taken various turns over the course of his life, with new forms and other accents. But his art is always driven by his colourful imagination, drawing its inspiration from his immediate surroundings, his friends and his habitat Ostende. Pictorially he visualises all of this as he sees it with his shifting artistic sense. His painstaking, almost mannerist way of painting marks off a predilection for his great example Jan van Eyck. Towards the end of the sixties, Elias abandoned the New Figuration, applying himself to wilder expression instead, in a style which leans towards pop-art. In 1968 Elias marries Eliane Kalter, who will appear on and off as his source of inspiration. During these years we situate "Eliane loves Elias" (1968), "Mods (self-portrait)" (1968) or "De hippies" (1970-1973). The first moon landing in 1969 called on his imagination, resulting in “Kuifje verlaat de maan" (1969) or "Ruimte" (1970). That is the period this report dates from, in which Elias discusses his work freely, as well as his background and sources of inspiration. Part of the BRT (Belgian radio and television broadcast network) television series ’Openbaar Kunstbezit’ (Public Art Heritage).

Content:
00’00" Leader. 00’07" Titles. 00’12" The painter Etienne Elias at home (Langestraat, Ostend) speaking about his painting. 03’35" Pictures of Jan van Eyck’s The Arnolfini. Elias speaking about the influence of van Eyck, his own origins, his way of working and his themes. He shows a series of self portraits, paintings relating to space-travel, homages (to René Magritte and Jan Dibbets amongst others). 10’15" Credits. 10’30"
(Source: Jef Cornelis 1964 - 1990, Espace Art Contemporain : Maison de la culture et de la Communication de Saint-Etienne, 1991) 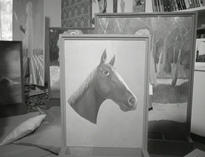 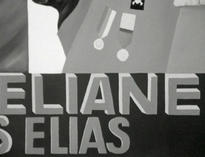 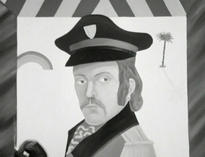