VISIONS OF A DISAPPEARANCE

Seated in a corner, Acconci is enclosed by a video camera and a monitor. They show him the same scene that he plays at that moment. Acconci tries to disappear; he wants his own image to be erased in the eyes of those who are watching. Initially he calls out for a possible viewer. There must be someone who watches – without a witness he cannot prove that he can make himself disappear. Later he dares him/her to go away and – more harshly – he tries to chase-off him/her. In each situation he raises the premise of a work’s existence: there must be a recipient that reads the message the artist has sent to the world. ‘Visions of A Disappearance’ forms, in this sense, a fascinating, essential reflection on the nature of cinema, video art and, more generally, on every form of communication. The actions the artist undertakes in order to disappear are alternately hilarious and arresting. In this way he presses on his eyes with his hands, shuts himself out of the picture on the monitor in front of him, tries to shake his head off his body, pushes himself as far as possible into the corner – away from the viewer – turns his back to the cameral (and the monitor and the viewer), twists his head toward the ground, tries to roll himself up, and attempts to beat the consciousness out of his head. But no matter what he tries, Acconci’s attempt to disappear is hopeless and doomed to fail.
Instead of disappearing he torments himself more severely; talking with the monitor on which he sees himself, he is at the same time an actor and a subject of his own viewing – an animator in his own animation. Finally, ‘Visions of a Disappearance’ has something insuperably painful about it. The artist who absolutely wants to function as a maker, at one and the same time wants to escape from his own creation, as well as from the possible recipient. 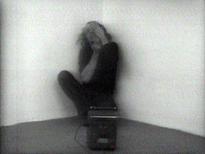