"Gong + presents three previously unpublished compositions by Philip Corner recorded in New York City, 1974. ’Metal Meditations with Listening Center’, a 29 minutes long piece, is a collaboration between Philip Corner and Bill Fontana. At that time Bill Fontana was very interested in the resonance properties of every object, putting his ear to everything, and sometime recording what he called ’Listening Centers’ (soon to be issued by alga marghen). A microphone placed in a resonating space (for example a jar, or a pipe) recording the environment with no intervention from the artist. This time the ’Listening Center’ was integrated as an active element on two pages from ’Metal Meditations’ (’one stroke: vigorous: one resonance’ and ’these are twirlings, sworlings’) performed at the Intermedia Foundation. The continuous resonance of metal objects mixed with the chaotic sounds of New York City distorted through the ’Listening Center’. ’Gong!’ is a series of works and can be considered forms of kinds of ’Metal Meditations’. They are more-elaborated performing plans for/on this ’prototype of all rich resonances’, so, are musics assuming long-resounding & more-than-single-pitched large-surfaced (likely) lower-tone-favoring metals. Some substitutions are possible: piano? low clusters and selected sonorities. Colors controlled from pedal. Struck by soft stick(s)--- or from keyboard. This specific version, titled ’2 as entrance ? passageway (resounding regularly)’, was recorded on May 22nd, 1974 at The Kitchen and performed by Philip Corner, Brian Dallow, Daniel Goode and Carole Weber. The piece starts with deep resonances of the gong played by two performers and very slowly fades into the pulsation of the low-key strings of the piano. The last composition on this compact disc, taken from a different series of works titled ’Pulse Polyphony’, was also recorded at The Kitchen during the same festival. ’Pulse Polyphony’ compositions may use very different materials; one of them (the central part of ’Oracle’, an electronic music piece) was included in On tape from the Judson years, a previous compact disc issued by alga marghen. The version presented here is the passage from string piano to bell-tree."
(https://www.forcedexposure.com/) 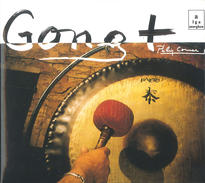