In 1997, John Marriott proposed ’Vomit Star’, a six-foot star constructed from fake vomit, for his solo exhibition at the Power Plant Toronto. The project was rejected, regrets lingered. “Marriott and Reinke demonstrate the affirmative value of domestic voodoo in this descent into crime-scene-glitter-porn (which is presumably one word in German). When you make celebrities the target of your repressed rage, they more or less become family members.” (Metro Star)
Shot and performed by Marriott, edited by Reinke. 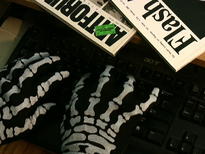 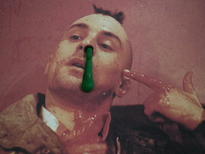