This video by Konrad Becker combines two aspects. First of all ’Public tranceport’ is a documentary about the street media event, that took place on July 11th 1992 in Vienna. But it’s also the intentional declaration of an underground movement, consisting of video and music artists, that want to reach the people of the street and not the market. Becker recorded scenes from the underground party, where screens were playing videos and animations, and musicians performing. The flashing images of people dancing and excerpts of psychedelic videos are alternated with short messages from the artists. Their view is that the cold war is now replaced by a code war, lead by data-guerrilla’s and media-pirates who want to redefine the logo- and information culture. The sounds of computers and videos are used, resulting in a subversive music soundtrack. As it is the media who determine collective consciousness, they, as artists, are trying to anticipate to that new development. 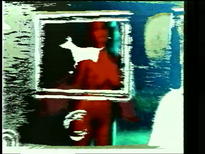 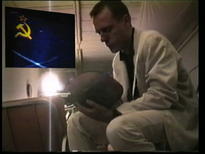 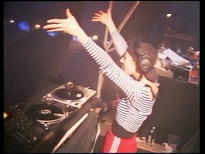