Symbolism is the bridge between Romanticism and Modernism. The recordings for this movie started during summer 2004 in Antwerp, in AMVK’s studio in Belgium. There she filmed the Symbolist, personified by painter-fortune teller Louis Wuytack, and the romantic, personified by musician Mauro Pawlowski. In december that year AMVK filmed body-artist Danny Devos, as personifier of modernism, in the Paris apartment of curator/editor Guy Schraenen. Additional recordings in Berlin, Xiamen (China) and Vladivostok (Russia) were used. 16-year old young artist Raphaëlle Jamet completed the scene with the sparkle of her young enthusiasm. The presence of the city of Berlin, its history and future, but especially the here and now that AMVK experienced during her 1-year DAAD residency, turned out to be the ideal and decisive factor to finish the film as it is.
The symbolist changes automatically, as a romantic, into a modernist. It’s time to apprehend that modernism was the fruit of intellectual scarcity, decaying towards the ultra-artificial on every level of civilisation. Its old-fashioned rigidity has to make place for a more spiritual concept of what a human being is and needs.

“Van Kerckhoven produced the film Let’s Try to Find Out What Goes On in the Male Barracks as part of her ongoing multimedia practice. Rather than being a feminist take on male theory it details a female curiosity of how significant tendencies of 20th century modermism might function if re-staged by a woman. Van Kerckhoven creates a deconstructive filmic narrative, in which the protagonists are a symbolist, personified by painter-fortune teller Louis Wuytack, a romantic personified by musician Mauro Pawlowski and performance artist Danny Devos, as personifier of modernism.
Symbolism is represented as the bridge between Romanticism and Modernism. The symbolist changes automatically, as a romantic, into a modernist. Modernism here is seen as the fruit of intellectual scarcity, decaying towards the ultra-artificial on every level of civilisation. As a critique of the rigidity of modernism the film’s broken narrative, switching imagery and references to eroticism and death turn the representation of the essential modernist into a spiritual portrait of the male artist. The film’s premise is a theoretical critique yet it’s result is a mesmerising array of eroticised sequences and poetic imagery. The title of the film leads to the reading of the film of the female director as the complicit voyeur into the practices and belief structures of imaginary male artistic production in the form of a double-take.
The footage was filmed from 2004 until 2006 in Antwerp, Paris, Xiamen (China) and Vladivostok (Russia). Raphaëlle Jamet and Guy Schraenen contributed towards the completion of the film.“ (Bea De Souza) 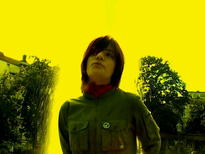 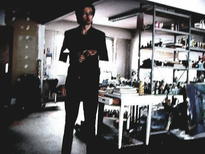