In AS ] THEN static, photographical images are alternated with, among others, shots from a driving car. The recordings were partly made in the immediate surroundings of the former Wielemans-Ceuppens brewery in Brussels; the locations consist of building yards, the railroad, a crossroad and a railway viaduct. These images are linked to recordings made on Boulder Highway in Las Vegas. AS ] THEN, partly because of its use of words (AND, TO), reads as a special moment from the diary of the existence of a city and its transportation infrastructure: the number of building yards in Brussels is countless and Las Vegas is the fastest growing city in the United States. During the editing Downsbrough linked movement and sound. When the movement stops, the sound dies as well and both image and location pass into an apparent stand-by mode. The video was made for the WIELS! Exhibition as an assignment for the Centrum voor Hedendaagse Kunst Wielemans-Ceuppens Project. 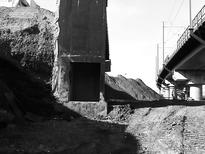