In this work Acconci again speaks directly to the viewer – “You, you are there in the space, somebody is there, you are there” – wherein the artist makes an attempt to change places with the viewer. The artist lies on his back with his head facing the camera. Or in other words: from the perspective of the viewer he is seen upside-down. Acconci begins an imploring and hypnotic monologue that he regularly cuts-into by humming/singing, a dramatic build-up of tension that he also employs in ‘Turn-On’ and ‘Face of the Earth’, amongst others.
Acconci avidly teases the viewer who has already quickly become the object of the work, a slave, as it were (Acconci actually makes the comparison with a dog or a dancing bear). Alternately flattering, offending, dreaming and forcefully pleading, the artist tries to coax the viewer into taking his place. In ‘Command Performance’ Acconci expresses his desire to no longer be the artist or performer. He wishes to be replaced by the viewer who, consequently, also becomes the work of art. In this way the viewer would create his own artwork. Or, as the artist himself says: “I dream you, you come right out of me, you come right out of my head” and “You are in the spotlight, you are on the screen now”.
Moreover, ‘Command Performance’ again contains many self-referential, autobiographical elements and indications of further works, as well as exposes the route that Acconci had taken thus far. In this sense this is a key work in the artist’s oeuvre; it marks the end of his live performances and appearances in front of the camera, and sets the tone for his later, interactive installations. 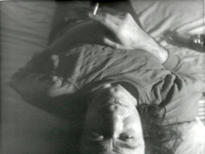