ET[- opens with a silent black-and-white close-up of a vertical rod shuttling back and forth across a mechanical loom. The short sequence could be mistaken for footage from an early 20th-century propaganda film. Cut sharply to the next scene, also in black and white and taken from a fixed position but unmistakably contemporary. Reflected in a polished, slightly distorting surface, cars are seen entering a gated parking lot. That image is overlaid on the lower left by the film's title, printed in black, and is accompanied by a burst of ambient sound: the dull rumble of tra c. Cut abruptly to a silent close-up in color -- a kind of industrial interior still-life-- then cut again to black and white: a steel door opens vertically onto a cavernous corridor where mini-forklifts scurry about. The rest of the film, which zig-zags between exterior and interior views, is in black and white. Two more jarring spurts of ambient sound are heard and a second word, LA, appears, in white and preceded by a closed bracket, just before the final fade-out and credits. The reflected scene over which ]LA is superimposed is much like the one seen in the film's title image.

ET[- has all the characteristics of a signature piece by Peter Downsbrough. The mostly silent, almost entirely black-and-white film is a visual exploration of constructed form, in this case, a modern factory building, a sprawling reflective box situated next to a busy road in a semi-rural setting. The blind facade of pleated, polished stainless-steel mirrors the constant flux of its surroundings and seems to dissolve into them. Inside is a di erent story: a universe of crisp, hard-edged geometries, gleaming surfaces and clinical precision. Giant spools, looms and bolts of material are stacked, aligned and otherwise arranged in perfect order. Fully automated machines revolve, throb, swivel and tick, each in its own rhythm and speed in the film's eerie silence. Eerie too is the absence of humans. Except for the two forklift operators, whose tiny vehicles occasionally career by like wind-up toys in a madcap adventure, there isn't a soul in sight.

The camera surveys the factory's outside features and inner workings with slow pans, and it fixes on details with a steady gaze, shifting its focus constantly from interior to exterior, and its pacing from smooth, stately pans to rapidly cut fixed shots -- a visual interweaving that mimics the manufacturing processes taking place in the factory itself. If the final product is shown wrapped up and ready to go, we don't necessarily recognize it as such. However, we do witness its departure in trailer trucks as they pull out from the factory's loading docks, bound for the highway. That part of the drama, too, is seen reflected in the building's skin. (Source: Sarah McFadden) 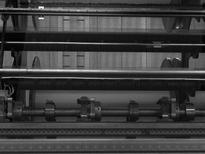 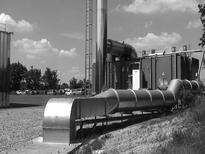 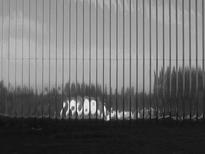 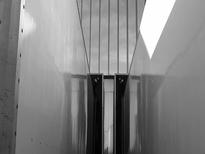 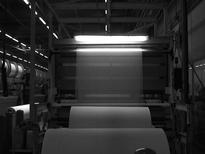 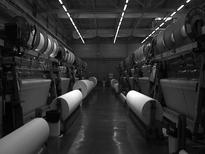