Ego Sumo Version 2 (2005) is the second attempt by Emilio López-Menchero to embody a Japanese Sumo wrestler. The work answered to the invitation of Michel François to contribute to the group show Théatre des Opérations that took place in La maison de la Culture d’Amiens, France. This version is recorded in one take and it defers from the previous one for the location, namely a training dance room, and a sharper image quality. Nevertheless, the same issues – like physical and psychological mirroring, paroxysm, embodiment, amateurism and excellence in art - are tackled, but this second version also questions the theme of repetition in art. 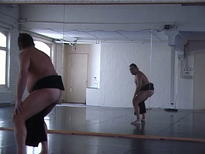 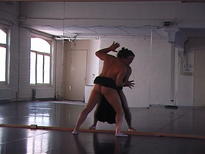 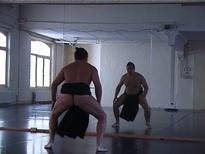