Three people walk across the fields in French-Flanders and along the North Sea coast during the last three days of the year. A man, a woman, a man with a camera. The journey exposes the character of the landscape. Flemish clogs of earth stick on their feet. The open, flat space is covered by a dark, grey sky. Along the road, the lonely sign "Vous êtes en Flandre" bears witness to the absurdity of the Belgian language problem. This journey is an observation of three characters: their delicate but tense relationship. Along highways , roads, fields and finally empty beaches we sense the vulnerability of communication. Above all the journey confronts us with the mechanics of the cinematographic apparatus? The Super-8 blow-up accentuates the grain texture. The unexpected rough editing and the rattling sound of the camera engine highlights the cuts in the film. The focus is on the machine: the man is talking to the camera(man), he is dragging alongside the tripod. Gradually, the roles are reversed, the couple wants to film. Documentary becomes fiction. The objective report becomes a subjective story. A film, a portrait, a self-portrait. 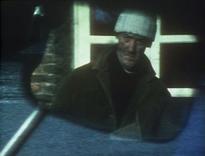 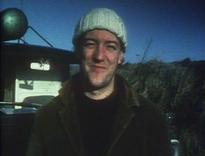 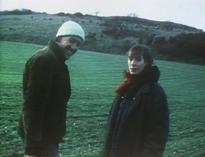 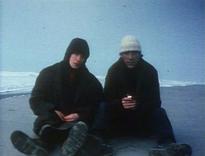