‘Feed Back Paint’ is based on a simple concept people have been experimenting with for several decades: video feedback, or in other words, what happens when a camera films a screen surface in real time, and the signal is sent back to the very same screen. The technique is simple, its behaviour unpredictable. The echoes result in a complex dynamical system, which generates all kinds of non-linear, self-organising patterns. These figures might be compared to applications of fractal geometry, in which certain natural phenomena are visualised, demonstrating an infinite form of self-similarity: an image contains thousands of reduced copies of itself, each of them containing even smaller copies. Pascal Baes projects the feedback onto his life companion Aï Suzuki, radically interfering with the images through digital video effects, mutating forms, penetrating textures and designing his visual experiment as a psychedelic phantasmagoria of the ‘corpus humanis’ and distorted sensuality. Demographical lines merge with body shreds and facial features in a restless outburst of colour, light and movement, expanding into a claustrophobic experience in combination with an electronic composition of sliding and lashing sounds. 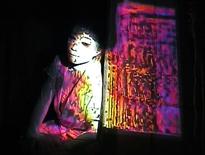 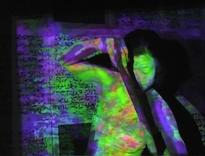 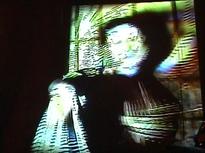