Three boys, Tonton (15), Dodo (14) and Daniel (12), took a series of photos and made short videos during the elections in Goma, Eastern Congo. With the assistance of the Congolese filmmaker brothers Petna and Sekombi Katondolo, the children wandered the streets of Goma with cameras they had been sent from Brussels. Little by little they sent back their pictures: glimpses of the run-up to the elections, the campaign, the first and second rounds of voting, the celebratory atmosphere... These are the same boys who re-enacted the elections – or it would be truer to say ‘pre-enacted’ them, since the actual elections had not yet taken place – in the video installation ‘Les Mouchoirs de Kabila [Kabila’s handkerchiefs] (2005). In the meantime there have been two rounds of presidential elections; the first one on the 30th of July 2006, and the second, and final one on October 29th. On the 15th of November 2006, the official electoral commission declared Joseph Kabila the winner of the elections with 58.05 percent of the votes. Until the election results, Congo was governed by a transitional government, led by President Kabila and four Vice-Presidents. This temporary set-up is generally known as “4+1” (opponents say that 4+1 equals 0). When the children in their game refer to “Azarias”, they mean Azarias Ruberwa, one of the four vice-presidents of the transitional governement. He represents the former rebel formation and current political party, Rassemblement Congolais pour la Démocratie (RCD). The voices in the room are those of Congolese Tutsi soldiers. They were trained as child soldiers in Rwanda and fought alongside the FPR (Rwandan Patriotic Front) during the genocide, and later took part in the Congolese wars of 1996 and 1998. They are followers of the RCD, the rebel group that, with support from Rwanda, controlled Eastern Congo between 1998 and 2003. They glorify that era and admire the discipline of Rwanda in contrast to the unrelenting chaos in Congo. But now that the war is over, they are in an uncomfortable position. Since the war, these soldiers have continued to keep in close touch with their blood brothers in Rwanda, so that many Congolese consider them to be Rwandese. But they consider themselves to be 100% Congolese, and feel constantly under threat. Their attitude is one of ambivalence. Many of them support or sympathise with Laurent Nkunda, a dissident Tutsi general who over the past few years has led a number of attacks in the eastern part of the country, thereby endangering the peace process. Although an international warrant has been issued for his arrest, some regard him as a hero, a revolutionary who defends the interests of Tutsis in Congo. 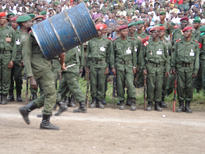