THE CLANDESTINE IN THE WORK OF JEF CORNELIS

Jef Cornelis (1941) worked as director and scriptwriter for the VRT, the Dutch-language Belgian public broadcasting corporation, from 1963 until 1998. The publication The Clandestine in the Work of Jef Cornelis comprises two essays about ‘hidden’ messages in the television films Daniel Buren (1971), Sonsbeek Beyond Lawn and Order (1971) and Landscape with Churches (1989). Koen Brams considers Cornelius’ explicit strategies to bring to light differences of opinion in the art world in the year 1971. Dirk Pültau analyses the covert elements of the soundtrack of the film Landscape with Churches. What at first hearing seems a classical recording turns out, on further consideration, to contain a ‘demonic’ message. A DVD that holds the three original films with English subtitles accompanies the publication. The Clandestine in the Work of Jef Cornelis calls attention to an as yet unknown aspect of Cornelis’ oeuvre and contains records by Geert Bekaert and Georges Adé, texts and an interview that have rarely or never been published.

The Clandestine in the work of Jef Cornelis
12x18cm, 96 pages, English 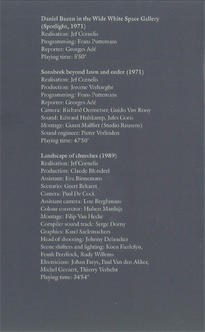