OFF BY HEART AND OUT OF BREATH. A SILVA RERUM

This book is printed on 500 copies of which 10 form a unique edition, signed and numbered by the artist. The publication is accompanied by the exhibition "Off by Heart and out of Breath - A Silva Rerum" at Argos, Centre for Art and Media from April 24rd June 26th 2016.

In the summer of 2014 Wendy Morris walked from the north of France to Vlissingen in the south-western Netherlands, looking for traces of her ancestors, who in the seventeenth century took this route to escape religious persecution; eventually, they were to find a new home in South-Africa.

In Argos, Morris wants to take the visitor along on her quest for these (mostly absent) traces of her ancestors, while at the same time she seeks to raise questions about themes that are still very relevant in our times, such as migration, persecution and identity. The exhibition is based on an artist’s book that is published on the occasion of the exhibition. Both depart from the idea to create a Silva Rerum for the elder generation, as well as for future generations—a book these future generations will pass on and to which each generation will add its contribution. The book as exhibition, but also the exhibition as book. The first part of the title Off by Heart and Out of Breath refers to Morris’ walks, during which she recited the names of her ancestors aloud till she knew them by heart.

At the same time she kept a meticulous record of her impressions and discoveries in her diary, from which she generated fourteen letters she sent by post to some twenty addresses in France, Belgium, the Netherlands and South-Africa.

Off by Heart and out of Breath – A Silva Rerum is a layered project that challenges the visitor to question his or her own past and position, and in which links with the present refugee crisis are never far off. 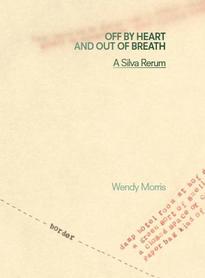