Paris’ bdv (bureau des vidéos) dedicates a new DVD collection to curatorial practices and exhibition history called Archives. The series starts with the release of two major titles by Jef Cornelis (1941) produced at the occasion of Documenta 4 (1968) and Documenta 5 (1972). Edited and introduced by the art historian, curator and director of Le Magasin (Grenoble), Yves Aupetitallot, these titles constitute unique accounts of two exhibitions which were seminal to current contemporary art practices. They present the artists and the exhibited works, the curators of each Documenta as well as the debates that animated the preparation and opening of these exhibitions.

Documenta 5 in 1972 could have gone into history as the first instance of an exhibition as a spectacle. Supervised by Harald Szeemann from Switzerland, art made its way back to the museum. The main issue at hand was the economic, political and medial significance of the event for Kassel. It was as if the avant-garde was buried for good. The significance potential of art was individualized and proclaimed a matter of the artists on the on hand – mainly those of individual mythologists – and a responsibility of the curator on the other. Artist-curator on one side, artist-singer on the other: this constellation was to determine the Documentas of decades to come. Although this film brings an outlook on trends of the moment like, among others, hyperrealism, conceptual art and kitsch, it can’t be considered merely as a report of a historical event: it is just as well a possible approach to the phenomenon of ‘Documenta’ as a whole.

In some ways Cornelis conceptualises a way of appropriating the event, sidestepping and questioning the definitions of exhibition makers, but also of artists, of an exhibition, of contemporary art. This is possible because Cornelis takes his own medium as a subject. He ignores and questions the authoritarian position offered to him by his medium and he provokes the spectator into judging for himself. The commentary is limited. It is put into perspective and completed with accompanying interviews. In doing so Cornelis enabled a perspective which is not clouded by mystifications and mythomaniacs. 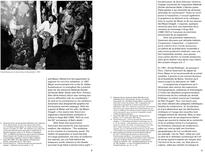 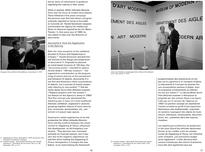