The publication project Printed Cinema continues the audiovisual work of German/Italian artist Rosa Barba, as a personal reflection on the essence of the cinematographic, wherein images are merely articulated in the space in-between images. Gaps, ellipses, dialectics between images - basically modernist notions - are essential in that respect. In Printed Cinema this is expressed in the editing principle, as well as in the oppositions between film and printing, between text and image. Apart from the specific distribution method, of course, which extends the project into a wide range of cultural and social contexts. In this way Printed Cinema challenges the outer boundaries of the artist’s book. Mechanisms appropriate to the medium of film are translated into a different context.

Printed Cinema #1 - Broadcasting from Home, containing night shots of a city taken from a high-rise building, appeared in October 2004 as a free supplement to the season’s first issue of the Austrian art magazine Springerin.

Printed Cinema #2 - Parachutable Obstacles was distributed by the Australian Centre of Contemporary Art (ACCA) on the occasion of the exhibition A Molecular History of Everything that ran from December 2004 through February 2005, and tells a story about a quest by an unspecified protagonist for his inner being, primarily a quest for the essence of a medium.

Printed Cinema #4 - Who can tell I’m inventing? is talking about a village that lives in instability, steadily moving toward the possibility of vanishing. The village is located around a sleeping volcano, whose date of awaking is, as yet, not precisely predicted. The people are always ready to leave their home, although they continue to expand their architecture into the unforeseen landscape. Printed Cinema #4 was presented at the 9th Istanbul Biennial in autumn 2005.

Printed Cinema #5 - Outwardly from Earth’s Center is based on the idea of a story which exceeds the frame, by superimposing the environment onto the projection image, adjusting and failing, until the layers finally become synchronized at the moment two people enter the double-scene and become clearly visible in front of the white screen. The screen becomes part of the image and dissolves with it - there’s no hierarchy between the inside and outside spaces. Printed Cinema #5 was distributed in December 2005 as a supplement to the Ein+Alle magazine of the Kunsthalle Fridericianum, Kassel.

Printed Cinema #6 - Wrong Edit was distributed at the beginning of 2006 as a special edition by JUNI KunstZeitSchrift and Badischer Kunstverein, Karlsruhe. The magazine consists of text pages of a film script printed on canvas that has been torn apart and reedited. The text tells the story of a man who loses his carpet while carrying it through the streets, and the subsequent search. As an object the printed carpet was able to be seen in the Kunstverein during the exhibition Rosa Barba. Who can tell I am inventing?

Printed Cinema #7 – Waiting Hall / Terminal was published at the end of 2006 – beginning of 2007, on the occasion of Gouda Lichtjaren, an exhibition on ‘light’ in the Dutch city of Gouda, its historical centre. The magazine documents a three-part film installation on public space by Rosa Barba, shown in a former bathhouse. The installation uses three 16mm film loop projectors that present different points of view about the story of a young boy witnessing a crime in an airport waiting area. His observation is intercut with scenes of two prisoners discussing the political background of their confinement. The linear logic of the story is disrupted by the shifting of the plot into unexpected territories. Printed cinema #7 is not only a document of the installation but provides an open end to the story, which extends the plot into the city streets. By leaving the mediating formats behind, the story infects the spectator’s mind in an almost paranoiac way.

Printed Cinema #8 - Waiting Grounds was distributed on occasion of the exhibition They Shine by Rosa Barba that took place from November 2007 to January 2008 at the Stedelijk Museum Bureau, Amsterdam (SMBA). The magazine shows film stills with a narrated text and off-site landscapes in the Californian Mojave desert, which are used as test-fields from different formations, for example: nuclear test grounds, gas-pipelines, a solar electric generating station, Tehachapi windmills, etc. “An exploration of the internal fringes of the desert in order to understand the nature and the extent of human interaction with the earth’s surface, to establish future concepts in a timeless environment.”

Printed Cinema #9, Stop the drifting of Gotska Sandön was distributed by Index Foundation Stockholm, Bildmuseet Umea and the Baltic Art Center, Visby, Sweden. The text is by Jan-Erik Lundström. The magazine, in the form of a newspaper, is borrowed from Barba’s Outwardly from Earth’s Center, a 16mm documentary fantasy, poetic depiction of a fictious course of events partly based in reality. The venue is the Swedish island of Gotska Sandön, which, de facto, moves towards the north, away from Gotland, at the speed of a metre a year. The film that was exhibited at Bildmuseet from February to April 2008 depicts the persevering islanders’ arduous attempts to stop the drifting of their island.

Printed Cinema #10, Vertiginous Mapping was published in May 2008 on the occasion of a web project commissioned to Rosa Barba by the Dia Art Foundation, New York and was distributed by DIA Beacon. Both web project and magazine take as a starting point, the relocation due to ground instability caused by massive mining in Alkuna, a city north of the Artic Circle, to ironically address aspects of uncontrolled corporate power. 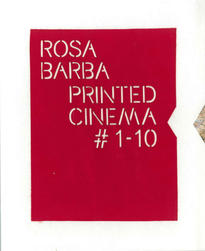 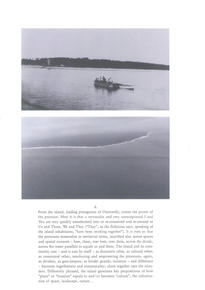 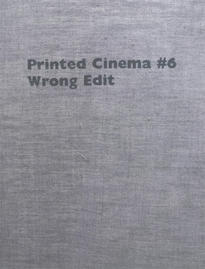