Featuring: Otjesd & The Making of Otjesd (2005) and Metropolis, Report from China, a project with Maya Schweizer (2006).

Clemens von Wedemeyer’s films combine an awareness of social issues with an investigation of the multiplication of cinematic perspectives and the processes of filming in front of as well as behind the scenes. At Argos, von Wedemeyer will present two film installation, Otjesd as well as a joint work with artist Maya Schweizer entitled Metropolis, Report from China. The title of the exhibition Films in Common reflects the cooperative and social working processes which characterise the works on view.

Otjesd, which in Russian means departure, is a meditation both on migration but also the act of film making itself, based on a real scene von Wedemeyer witnessed when he was in Moscow: Russians waiting in a queue outside the German embassy. In the unlikely setting of a wooded wasteland von Wedemeyer stages a surreal scene which intimates the Kafkaesque struggle with border bureaucracy. A group of people shift about the scenery, seemingly waiting for their visas, though there is no culmination point in the film since there is no clear border-crossing. We can see crowd barriers, metal detectors, a man who seems to be an immigration official; we hear fragments of spoken Russian but nothing actually happens, and the characters seem trapped in an oppressive vicious circle, a permanent state of transition. The film was made in one single shot which reinforces the sense of unease and entrapment and also recalls Russian film makers like Tarkovsky and Sokurov.

Together with Otjesd, von Wedemeyer will also show The Making of Otjesd, which describes the process and research behind the making of the film and a series of photographs from the set. The artist often includes a behind-the-scenes component to highlight the subjective realities of film making and to underscore the architecture of cinematic narratives. Otjesd is a poignant meditation on social isolation and borders, and a perceptive reflection on the borders between reality and fiction. At the same time, as with many of von Wedemeyer’s other works, it constitutes and an exploration into the intersection of art and cinema, a consideration of the idea of cinema as spectacle, and – ultimately - an investigation into the construction of the cinematic experience. As von Wedemeyer himself has said, “The cinema screen is a mirror. But below the reflection is a dark lake in which we swim... and down in that lake the recollection of all films and their effect on the viewer. This is what interests me most: to get a look inside that lake that is under the cinema screen.”*

In 2004 Clemens von Wedemeyer and Maya Schweizer travelled to China in order to research for an adaptation of the legendary 1927 feature film Metropolis by Fritz Lang. The film has not been re-made but the result of the artists’ investigations in Beijing and Shanghai is a documentary film entitled Metropolis, Report from China (2006). The film features the interviews conducted there, footage of the urban fabric, casting research and discussions with the workers and architects who are responsible for the building of the 21st century Chinese metropolis. It provides insight into growth of the Chinese mega-city, but also questions the implications of modernity, development and progress at all costs. At the same time it is a potent metaphor on visions of the future, as well as the cultural and ideological entanglements that take place in the new global reality. In this work von Wedemeyer and Schweizer have created a convergence of two myths – the modern totalitarianism depicted in Fritz Lang’s Metropolis and modern China, whose staggering growth has become the subject of heated debate in the West. Indeed it is quite remarkable how Shanghai bears an uncanny resemblance to the futuristic city posited by Lang in Metropolis. Lang’s Metropolis and the explosive growth of the Chinese city – two befitting dystopic parallelisms - thus form the perfect backdrop to talk about ideas of development, ideology and socio-economic divides. At Argos the film will be shown alongside photographs and archival material the artists collected during their research in China.

*from an interview with Alexander Koch.

Clemens von Wedemeyer (b. 1974, Germany) studied Fine Arts at the Academy of Visual Arts, Leipzig. He has won several international awards for his short films, video works and installations, including the Böttcherstrasse Art Award (2005) and the VG Bildkunst Award for Experimental Film (2002). Recent exhibitions include solo presentations at the Kolnischer Kunstverein, P.S.1 MOMA, New York, and CAC Brétigny-sur-Orge (2006). He also participated in the 1ST Moscow Biennial, the 4th Berlin Biennial and the Turin Triennial (2005) as well as numerous group exhibitions and film festivals internationally. Wedemeyer will also participate in the Münster Skulptur Projekte this summer. He is represented by Galerie Jocelyn Wolff, Paris.

Maya Schweizer (b.1976, France) is an artist and film maker. She studied Fine Arts at the Academy of Visual Arts, Leipzig and the Universität der Künste, Berlin. She was the recipient of the Prize of the German Programme at the Oberhausen Film Festival Oberhausen (2006). She has participated in numerous group exhibitions internationally including, more recently, Magellanic Cloud at the Centre Georges Pompidou, Paris (2007), Storylines at the Kunstraum Munich and the Kunstverein Göttingen (2006) Schweizer has also worked with Wedemeyer on another film project Rien du Tout (2006) which was shown at the CAC Brétigny-sur-Orge. 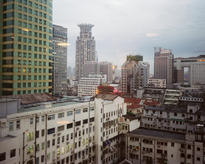