IBBT-SMIT LECTURE SERIES: IN TRANSITION? THE ROLE OF THE CURATOR AND THE ARTS IN A DIGITAL CULTURE

As part of the SMIT Lecture Series IBBT-SMIT, on Wednesday 29 February 2012 research group Digital Arts and Cultures organizes In Transition? The role of the curator and the arts in a digital culture. Invited speakers Beryl Graham, Frank Maet and Michelle Kasprzak situate, consider and debate this topic from an academic, philosophical and curatorial perspective.

In what way could the digital sphere influence the role of the curator and the arts? What does it mean to be a curator in a shifting, digital era? To what extent has Beryl Graham’s analysis, who has co-written the book “Re-thinking Curating. Art After New Media” (Graham and Cook, 2011), transpired? Should curators today be artists? What part does the visitor/viewer/participant have in this development? Is the suggestion of an interactive, or perhaps even a co-creative, system, realistic, or still rather utopian? How do, or should, curators relate to the audience? And, how do these transitions influence the role of the arts institution in the contemporary, digital context?

These, and many other related questions, will be addressed. Beryl Graham, professor New Media Art at the Sunderland University will give the opening lecture. She is followed by dr. Frank Maet, who wrote the dissertation “Nieuwe Artistieke tijden. Een filosofische kritiek van een door technologie bepaalde kunst”. He will approach the issue from a philosophical perspective. Next, Michelle Kasprzak, curator at Rotterdam’s V2, Institute for Unstable Media, and driving force of https://curating.info (Curating in a new media age) will set out a curatorial vision.

You are warmly invited! Doors at Argos open at 18h30, when we gladly offer you a sandwich buffet. At 19h30 the lectures start and conclude with an open debate. At 21h30 the evening comes to an end in a closing reception.

This lecture is closely related to the research activities of the Digital Arts and Cultures Research Group within IBBT-SMIT, as it focuses on the intersection of culture, the arts and new media. Starting from the observation of actual transitions in society, such as creative economy, convergence culture and the expansion of virtual social worlds, Digital Arts and Cultures researchers reflect on the position of the arts and culture in the network society and how static forms of creation, production, content, dissemination, participation and policy are becoming hybrid. 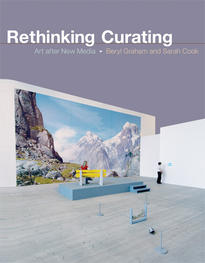