This video documents the thinking behind and making of Office Baroque, an on-site work the American artist Gordon Matta-Clark (1943-1978) created in 1977 in an empty house in the centre of Antwerp. For months, Cherica Convents and Roger Steylaerts followed the artist and others involved in the project, till its final completion. The makers remain deliberately in the background: the video is detached and merely documents. Supported by the menacing soundtrack (Syntheses, by André Stordeur), the documentary becomes almost abstract. The makers abstain from any comments whatsoever—they opt for soberness and detachment, creating space for their own subjects: the house, the artist, the curators and the labourers working on Office Baroque. Their editing is postmodern: throughout the entire documentary, we frequently see the final result, even when Matta-Clark is still engaged in the preparatory activities. Taking their time, Convents and Steylaerts confront us with every detail. The registering camera as it were scans the architecture and the interventions of the artist. Not only the soundtrack alienates the viewer, but also the images of passers-by and of life outside: a brass band, wading birds and tourists skewing at the camera contrast sharply with the mental world and environment in which the artist lives. 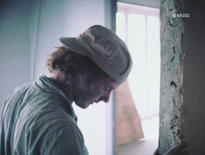 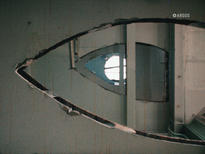 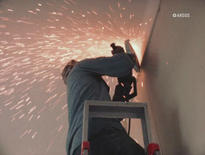