Jodice portrays a series of 82 isolated and ghostly houses in the suburbs of Oujda, a Moroccan city about 30 kilometres from the Mediterranean Sea. It was filmed at night with infra-red film, between the 17th and the 23rd of March, 2004, a week after the attacks on the railway stations in Madrid. Most of the 82 houses belong to MREs – Marocains Résidants à l’Etranger or Moroccans living abroad – generally in Belgium, Germany, Holland, France and Spain. They are mostly holiday homes, built by their owners with revenue from working as immigrants in different European countries.

Francesco Jodice (b. 1967, Naples) works in the overlapping areas of visual art, architecture and social engagement. 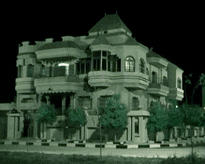