VITO ACCONCI - FROM WORD TO ACTION TO ARCHITECTURE

The New York artist Vito Acconci (1940) has been given several labels in the course of his career: performance art pioneer, master of conceptualism, and ‘the godfather of transgression’. He started his artistic career in the mid-sixties, as a poet: he saw the empty sheet of paper as a space through which the writer and reader could travel. His poetic actions later shifted from paper to the gallery, where they changed into performances in which he reflected on his own physical and psychological being. His writings became instructions for or descriptions of actions which he would then carry out himself. For example, he would follow randomly chosen people in the street (Following Piece, 1969). Or else he performed repetitive simple actions such as trying to catch a ball blindfold (adaptation study blindfolded catching, 1970). These actions were at first documented in words and photos, but as soon as video appeared he became a pioneer in the use of that medium. In 1972 he carried out his best-known performance, seedbed: he masturbated under the floor of the gallery while the visitors listened to the sounds through loudspeakers.

His body was always part of his seventies performances and installations, either physically or in the form of films or sound recordings. Acconci was looking for a new definition of the object and for a space for public experiences involving the viewer and the artist. He removed the traditional boundaries between the artist and the public, between an object and an event or a work of art and its right to exist in a spatial or social context. In the early eighties his interest in space led to the establishment of the Acconci Studio, where he brought together architects and artists to create plans for monumental changes to architecture and the environment. 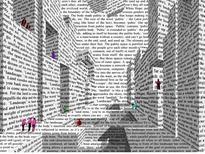