RALO MAYER - ... TRAVELING THROUGH BIOSPHERE 2, OR: ANASTYLOSIS OF FOLLIES

Ralo Mayer’s cross-media work derives its form from a process-oriented mode of artistic knowledge-generation. This artist’s main motifs include the investigation of narrative structures, the study of miniature universes and the interweaving of fiction and reality. Together with the artist Philipp Haupt and others, Mayer develops polyrhythmic narrative structures in the form of scenarios, performances, strip cartoons and spatial settings in which he questions his own position as a narrator and artist (and also the position regarding copyright) and creates several model worlds into which he introduces designs for space and time. Mayer’s actual starting point is often a well-founded long-term study. This results in ensembles of works that become complex – almost unmanageable – and which the artist then channels into specific forms and modules. The exhibition entitled ... travelling through Biosphere 2, or: Anastylosis of Follies presents two related large-scale installations that emerge from Mayer’s research into Biosphere 2. This construction, erected in the desert near the town of Oracle in Arizona and initiated by Space Biosphere Ventures, was the first large-scale closed ecosystem, the idea being to later apply this to closed space colonies. Although a milestone in this new scientific area, the experiments were soon perceived by the media and the wide public as a failure. Inside Biosphere 2 the inhabitants had to contend successively with a shortage of oxygen and food and split into two fractions, mirrored by even severe complications in the management outside, which soon lead to the abandonment of the original ideas behind the project. In the exhibition at Argos, Mayer interprets Biosphere 2 as a link between the utopian ideals of the 1960s and 70s and global transformation – a quest for alternative lifestyles that is still on the rise today. At the same time, the artist sees the failed project as a burlesque allegory of the attempt to get every aspect of life under control. It has resulted in experimental installations, in the literal sense of that term: ... travelling through Biosphere 2, or: Anastylosis of Follies represents an amalgam of graphic material, design, writings and thoughts, video, biological matter – plants, algae, shrimps and micro-organisms are all part of his work – and much more. 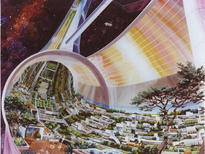 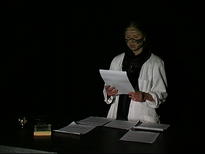 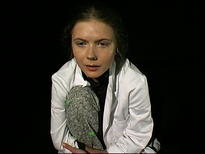