A mock documentary on the crisis around the Western hostages in Beirut during the 1980s. The events and circumstances are described through the testimonial of Souheil Bachar. Bachar, as the only Arabian hostage, addresses several dimensions of the crisis. He describes, for instance, the experience of captivity and the role of Western masculinity in this respect. The video adopts the conventions about the visual and textual ways of representation, like the documentary and testimonials, questioning the nature of individual and collective memories, and their role in the creation of generally accepted history writing.

A cinematographic enquiry shaped as a location scouting for a film in Nuremberg. The film itself, a story about a detective who is investigating a disappearance, is a fictional production which will never be realised. The video presents locations with a soundtrack explaining their possible use. The voice-over evokes, as it were, the “true” history of the city of Nuremburg, from the Third Reich up to a concert by the Rolling Stones.

Get Rid of Yourself
Bernadette Corporation

Defined by his makers as an "anti-documentary", this video combines footage of the riots on the G-8 meeting in Genoa in 2001 with performances by actress Chloe Sevigny, philosopher Werner von Delmont (alter ego of the artist Stephan Dillemuth) and members of the anarchist group Black Bloc, one of the organisations from the spearhead of the anti-globalisation movement. The combination of these elements results in a critical essay, ultimately questioning its own status and role, a cine-tract which renounces its own form, exploits reality and (positively) perverts 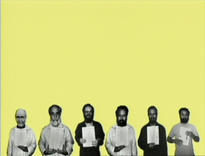