In the work of Ria Pacquée (1954) the relative and the existential converge. Like shreds of social archaeology she records her presence in this world, in photographs at first, and for some years now on video also. Pacquée begins with the premise that life doesn’t necessarily revolve around knowing and grasping, but that everything starts with breathing in and out, and a longing for the Other. During a residence in Paris she observed the people in a park for days on end. Always alone, even when in a group, interchangeable, faceless and genderless. They do not speak, yet they seem to communicate. Their gaze is not focused on anything in particular, yet each of them seem to be keeping to a clear trajectory; focused, with precise and repetitive movements. It is almost as if they are not from this world, both present and absent at the same time. Unconsciously their movements are adopted by the observer as well. In the end it seems as if she has become one of them: immobile, staring... Just like us. 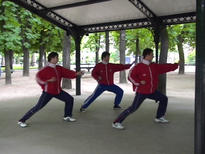 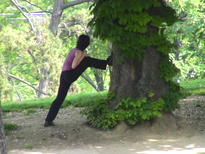 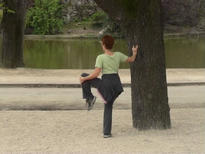