Autoportrait contre nature is a new report on the way in which François looks at the world. Though he works with an extensive range of media (such as sculpture, installation, photography, film and video) and the widest variety of materials (metal, plastic, glass, water, clay, flowers; natural as well as synthetic objects), his artistic language is unmistakably singular. This homogeneity is characteristic to François and is derived from a continuation of identical questions on the relations between Man and his habitat, the core and the cover, the external and the internal, between the world and the ego. The answers he composes to these questions, on the experience of Man, on how the world is sensed and how these sensations are related to our way of thinking and perceiving, are the standard measure of al his works. With the title titel ’contre nature’ François gives us an indication himself of what he is on about. The term is a reference to the ‘counter-nature(-al)’, to something unusual, something uncomfortable; but also to the tension between nature and its opposite (nature and culture or the organic and the artificial). But the word ‘contre’ also has a connotation of proximity, lying close against something.

François is concerned with al these things separately and collectively. The same is true of the works he shows. His exhibitions have complex frameworks of reference. One image refers to another (e.g. a photograph can find its equivalent in a video), which in its turn will allude to the reality outside the exhibition space. What seems to be a chaos at first sight is in fact a different kind of logic. This is not logic of hierarchy, rationality and straightforwardness. It is based far more on divergence, change and multiple possibilities, similar to the ramifications of a cactus, the pattern of an octopus. For this reason the exhibition is almost like a living organism to François. And similarly the skin of an organism not only isolates it from the outside world, it is also a means of communication. The exhibition should make contact with the outside world, with that which is far removed from art, just like any other organism. This form of contamination (a word often used by the artist) can for instance take the shape of large posters, which the visitor can take home with him. In this way the exhibition also spreads out to all sides, it is transported into the world. The work of François does not only consist of a number of tangible objects (a series of two- or three-dimensional images), but also to a large extent of dynamism, of the tension and continuous interaction between the individual, architecture, networks, and nature. Autoportrait contre nature appeals to our ability to look at the world in a different way, not only with our eyes, but also with our sense of touch, with attention both to the parts and their whole. 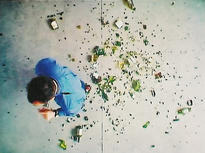 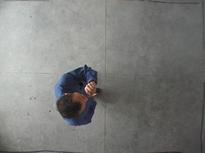 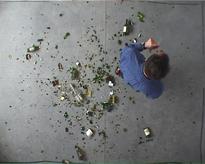