The Romanian artists’ duo Mona Vatamanu (born 1968) and Florin Tudor (born 1974) have worked together since 2000. Their work embraces a wide range of media—including film, photography, painting, performance and installation—and it questions, in a poetical and engaged approach, current issues such the neoliberalism, the politics of representation and the history of the 20th century. The solo show I Do Not Know the Real Story Which Happens There presents two new productions combined into a single audio-visual installation and a selection of recent films and videos. Freedom Towers (2014) consists of three wooden stakes. The work evokes expressions of power and refers to skyscrapers as the embodiment of the capitalist economy, secular religion and theism. The Sun and its Double (2014) is a film about an intervention on a former industrial platform and it questions the modes of production and consumption patterns in human society. The selection of a series of recent single-channel works from their multifaceted oeuvre aims to enlarge the topics approached in their new productions and to establish a common thread of references and positions. Featured works: Rite of Spring (2010), Le Capital (2011), Plus Valoarea (2009), Manifestul (2005) and Il mondo novo (2004).

With the support of Romanian Cultural Institute Brussels. 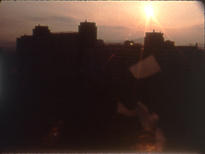 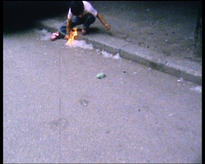