In the same way as the installation Medea, Michel Lorand’s most recent work but one, shown for the first time this summer as part of the argos exhibition Duo Track at the Vlaams-Nederlands Huis (Flemish-Dutch House) in Brussels, his new video installation situates itself on the tangent plane between literature and film. Again an essential part of the work is constituted by a text from Lorand’s hands and the way this – spoken or written – text relates itself to a series of matching images is approached.


The installation consists of three ‘layers’, as it were: six monitors are on the floor, strewn out across the space. The silent colour images bear witness of six walks through the chaotic city centre of Shanghai, shot with a handicam. Simultaneously a sober, harmonious, B/W-film is projected onto a great screen at the back of the space. The film displays decelerated night images of a highway along the edge of Brussels, with the voice of a young Chinese woman on the audiotape. On the sidewall to the left of the screen some kind of detached ‘subtitles’ for this voice are screened. On a second screen, finally, which is placed precisely across from the first one, constituting its counterpart in a way because of its identical size, a single text is projected, black on white: once again a translation of the monologue, in which the woman tells all about the relationship she had during seven days and seven nights with a man from the West, in her native city Shanghai. Everything is ‘kept together’ by the running text tape, constituting some kind of road movie with three protagonists: She, He and the City. The title of this work is also a reference to essential operations in a cinematographic process – the deconstruction of the recording, the ‘cuts’ during editing – and the ‘rupture’ between the characters in the story.

Even though the nine-minute installation purposely is not shown ‘in loop’ and it has a definite beginning and end point, it can’t possibly be perceived as a single coherent and rounded whole: he/she can never apprehend all the elements at the same time, has to make his/her way literally and metaphorically through the ‘deconstructed’ story, pick out a point-of-view, being kept at a distance the whole time. By recording the whole monologue in voice over and in Chinese, without offering the translation in the shape of conventional subtitles but rather as independent, visual elements (the running text tape, the full text o the second screen) the audience can’t fall back on stereotypical seeing patterns, creating some kind of opening. The detachment of sound and image, by the way, is a technique which has engaged Lorand for some time now. In the publication which was issued as part of his contribution to the 50th Venice Biennial (6 Scene a Venezia, Ludion, 2003) he writes about a film by Marguerite Duras – an author who is clearly a point of reference to Lorand: ‘The recited text is independent of the images, nevertheless it constitutes a harmonic whole, a distance which increases the amount of space, like a sound box reinforcing emotions.’

In that sentence the metaphor of ‘rupture’ receives a new dimension: between a disorderly, half-conscious ‘sub-layer’ of immediate perception (the chaotic colour images of a dazzling but ever elusive city centre by day) and the posterior recollecting/processing (the more stable, nightly, more stylized B/W images on the screen high up, the text) there is a wide gap, maybe on the exact ‘spot’ the creative process takes place. This abyss is made explicit, moreover, in the text: ‘And precisely on that moment I have to face the truth and understand the degree to which you are detached from my story’…

Lorand conceived this work as part of a ‘trilogy’, of which Medea constitutes the first part, Cut is the middle one and it will be finalised with a third installation under preparation, entitled Noir. This last work will be presented in February 2005 in the exhibition space Het Kabinet in Ghent. Apart from the fact that these three works explore the relationship between text and image each in their own way, they also make up a unity in other respects: everything is centred on a female character as well as the history of a rupture, the realization of an end that is coming near. Michel Lorand lives and works in Brussels. 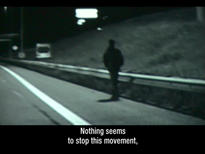 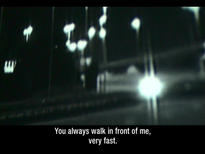 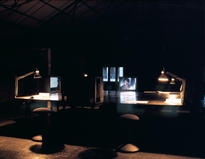 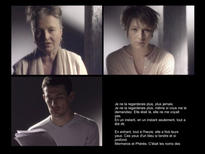