Could the fantasy world of a child provide a secret passage into the past? This question is the starting point of Sarah Vanagt’s (°1976) research on the “historical imagination” of children. How do children deal with the past, or rather, how do they shape it in their imagination? This issue was already initiated in the video Little Figures (2003), in which Vanagt had children of immigrants carry out an imaginary conversation between three historical figures, immortalized as statues in Brussels. This resulted in a blend of personal experiences, imagined story twists and connections, as well as shreds of previously overheard information. Precisely this twilight zone between knowing and not-knowing is fascinating – when children fill the gaps in their knowledge and understanding with building bricks from their own fantasy world.

The same curiosity instigated the documentary Begin Began Begun (2005), which situates itself in the borderline between Rwanda and the Democratic Republic of Congo. A violent conflict has been going on there for over 10 years. Sarah Vanagt went on the lookout for the miniature worlds children set up while they are playing – worlds in which time is stretched out and cut short on their own discretion, where objects are brought to life, where the boundaries between reality and imagination, life and death, order and chaos fade away. The children seem to be playing with pieces from the past, as it were.

The installation Les Mouchoirs de Kabila begins where Begin Began Begun ends: with images of refugee children in Goma, playing amongst the lava fragments which disrupted the city. From found material they build up a miniature city. Old, used phone cards suddenly turn into TV-screens, in a sardine tin which was converted into a living room; a piece of metal is bent to become a wheelchair. Cities rise and fall at each shower of rain. Everything is lava, lava is everything: arms, building bricks, diamonds. The ground underneath their petrified feet, the air for their asthmatic longs. The cause for their illness, a source of income. In order to make money the children sort the pieces of lava, which is subsequently processed as cement, or they sell paper handkerchiefs.

While the documentary is mostly situated at the Rwandan side of the border, the image material for the installation was filmed at the Congolese side of the border. Whereas the game of the Rwandan children was part of the tenth anniversary of the genocide, the game of the children in Goma mainly reflects the current chaos in Eastern Congo. There are radios and tv’s, white jeeps and blue helmets, presidents and vice-presidents, advertising and election fever. The tiny world of fairytale is used as a prism to look at the ‘greater world’. The trajectory the dolls cover in their self-made cars – which is also the trip the spectator makes through the imaginary world of the children – is nothing more than a detour to get to reality. In this way the children’s games become a barometer for the political climate in the area.

Death takes up a central position: dolls are buried between lava fragments, the dead fall and rise again. The children seem to turn into wandering links between the living and the dead, as if they emerged from underneath the vast, dark lava surface in order to reveal the world underneath the ruins.

The installation uses Super-8mm images, videos and pictures to offer glimpses of that “in-between space”, as an image of a society in which the surreal and the imaginary keep merging more and more, where the invisible might even have pushed aside the visible: the République Démocratique du Congo, RDC or “Rdécès” – republic of the dead, deceased republic – as the Congolese call it.

Les Mouchoirs de Kabila is spread out over various spaces, each with their own visual idiom and time experience. After a brief introduction into the social-political situation in the region of the Great Lakes, the visitor ends up in a dark, abandoned world, an environment in which shreds from the game of the children are projected onto the floor. They are detail recordings of the miniature cities, made on Super-8 mm, which reinforces the fragility and the transience of the game world. At the outer edge game fragments are shown on a larger screen, centered around death. In that way questions are raised: how do children in a torn world deal with the ruptures in their lives? How does death fit into their games (into their lives)? What is their relationship to the immediate past? In what way do the children tell us something about the way we deal with the past ourselves (and with death)?

The third environment consists of video images of the children while they mimic scenes referring to the tenuous political situation in the border zone. 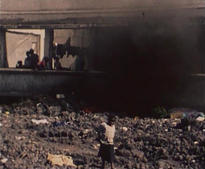 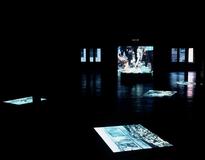