The location for the audiovisual work of Mona Vatamanu (1968) and Florin Tudor (1974) is Romania and its capital Bucharest. These artists check their ideas on the standards and values of globalised neo-liberal capitalism against the present situation in the democratic system that is still in the course of developing in their home city and country. They work in a modest, contemplative and essayistic register that feels somewhat nostalgic, and express their concern about such matters as the functioning of the collective memory, the remnants of collapsed regimes and the general public’s relative ignorance of recent history. In Procesul, the camera traces the facades of blocks of flats from the communist era, accompanied by an unemotionally recited transcription of the trial of the dictator Nicolae Ceausescu and his wife Elena. August is the fictional sequel to a Romanian film from the 1980s, Imposibilia iubire, and examines the meaning of love during the communist era. In alternation with shorter films, the programme emphasizes the role of Vatamanu and Tudor as well-versed commentators on current post-communist conditions, which extend far beyond their native country. 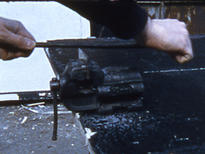