George Smits was a multi-faceted musician and visual artist.  He was a fixture of Antwerp's underground art scene starting in the mid-1960s, and preferably describing himself as a beatnik.It was during his time in art school at Brussels' Sint-Lucasinstituut that he formed a working friendship with the folk-singer Ferre Grignard, often performing together at Antwerp's music-café 'De Muze', home base for Ferre's skiffle band.  George Smits – also known by his nickname 'Toet' – played harmonica and guitar in the band.

In 1968 George Smits established ‘M.A.F.print’ – Mad Artist Foundation: “a one-man association to promote inexpensive art forms, art forms for the public-at-large: posters, comics, actions with an experimental mobile silkscreen studio". In 1969 M.A.F.print became incorporated into E.R.C.O.L.A. (Experimental Research Center of Liberal Arts), a veritable hub of the Antwerp art scene from the early 1970s on.  In 1971 members of E.R.C.O.L.A produce and distribute the underground comic Spruit, a "monthly guy's mag".  De Verhalen van Jan (The Tales of Jan) by MAF-print are chock full of absurdist humour.  During this period George Smits also received recognition (at Jeune Peinture Belge) with his light installations ‘The Colour Company’, where he veritably launches the colour spectrum in the exhibition hall.

In the middle of the 1970s George Smits falls 'under the spell of the egg'.  At a time when painting had been declared dead as an art form, Smits immerses himself in the painting techniques as practised by the Old Flemish Masters.  The psychedelic M.A.F.print-style replete with small figures created through automatic writing and free association now acquires form in tempera and oils.  George Smits would continue to paint right up to the end of his life, his styles and formats evolving over time. Starting in 1980, the interface between sound and image becomes his new field of inquiry.  With sound sculptures made of styrofoam, bamboo sticks, steel springs and cables, he worked to define space in terms of sound waves.  This resulted in performances such as ISOMOPOLIS (1981) at Antwerp's I.C.C. (International Cultural Centre) and participation in Initiatif d’amis  (1984) at the Vooruit in Ghent, as well as many performances in the Netherlands.

During the night-time broadcasts ‘Zbolk Night Radio’ on Antwerp's local Radio Centraal, his musical experiments took the form of ‘radio pictures’.  Beginning in the 1990s, Zbolk combined electronic, digital and acoustic recordings.  Writing about Zbolk in 1994, Smits gives this description: "How far can someone go in constructing acoustic instruments from junk, playing and then recording them, to compose songs on cheap digital equipment with samples of that music, able to mix these songs live on a weekly radio broadcast with the original sounds, and all this without somebody saying: 'You're out of tune, you're a freak, you can get out!'" Released in Spring of 1997 was his CD Zbolk Night Radio, just a few months prior to his sudden death. George Smits saw the creation of cheap art forms for a broader public as 'a higher purpose'.  The extreme integrity with which he pursued this goal is the connecting thread that runs through the utterly diverse œuvre of Toet – M.A.F.print – Zbolk Smits. 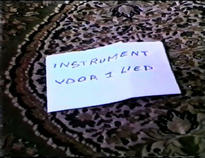 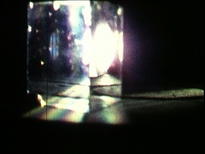 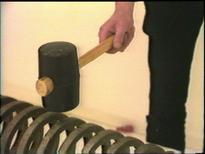