Filmmaker Elia Suleiman was born in Nazareth, well after the establishment in 1948 of the state of Israel in historic Palestine. He lived in New York and Paris in self-imposed exile, before returning to the land of his birth to look for his roots. He now commutes between New York and Nazareth. He made his first work, Introduction to the End of an Argument / Speaking for oneself... Speaking for others... (1990), while still living in New York. It was made in collaboration with Salloum, who had already produced several installations and videos, that in particular question the construction of culture in the media, its stereotypes and pervasive influence in the political and personal realms in one’s life. Both Salloum and Suleiman deal with questions that are for them central: exile, ethnic representation and the notion of identity, opening territories for a multiple application of ’identity’ beyond the constraints of nationalism(s), beyond definition, where the concept ’Mid-East’ is disoriented. Like Salloum wrote, "To face up to a history that is ours and never was, to develop a context for this face of history and to see it stop being what it was and continues to be." In Introduction ... they criticize the representations of the Middle East, Arab Culture and the Palestinian people, produced by the West. The video mimics the dominant media’s forms of representation, subverting its methodology and construction. A process of displacement and deconstruction is enacted attempting to arrest the imagery and ideology, decolonizing and recontextualizing it to provide a space for a marginalized voice consistently denied expression in the media.

In subsequent videos such as This Is Not Beirut / There Was and There Was Not (1994) and Talaeen a Junuub / Up to the South (1993) Salloum kept on examining representation and history of the ’Middle East’, as constructed in our collective and individual psyches, trying to counter the erasure and the misconstructions. Suleiman however reached for a more poetic image, stating that "by negating the other’s point of view you end up trapping yourself in a counterattack". His latest movies Chronicle Of A Disappearance (1996) and Divine Intervention (2002) represent personal journeys, searching for what it means to be Palestinian, compiling possible truths, transgressing genres and blending fact with fiction to explore the intertwined boundaries of storytelling, history and autobiography. Devine Intervention was awarded with the Grand Jury Prize at the Cannes Festival in 2002. 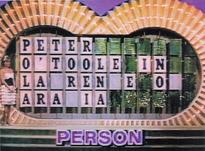