A distinguished figure in American contemporary music, Robert Ashley holds an international reputation for his work in new forms of opera and multi-disciplinary projects. His recorded works are acknowledged classics of language in a musical setting. He pioneered opera-for-television.

The operatic works of Robert Ashley are distinctly original in style, and distinctly American in their subject matter and in their use of American language. Fanfare Magazine has called Ashley’s Perfect Lives “nothing less than the first American opera...,” and The Village Voice comments, “When the 21st Century glances back to see where the future of opera came from, Ashley, like Monteverdi before him, is going to look like a radical new beginning.” A prolific composer and writer, Ashley’s operas are “so vast in their vision that they are comparable only to Wagner’s Ring cycle or Stockhausen’s seven-evening Licht cycle. In form and content, in musical, vocal, literary and media technique, they are, however, comparable to nothing else.” (The Los Angeles Times).

Born in Ann Arbor, Michigan on March 28, 1930, Robert Ashley was educated at the University of Michigan (Mus.B., 1952, Music Theory) and at the Manhattan School of Music (Mus.M., 1954, Piano and Composition.) From 1957 to 1960 he continued to study Composition and Acoustics at the University of Michigan’s Speech Research Laboratories (psycho-acoustics and cultural speech patterns), and was employed as a Research Assistant in Acoustics at the Architectural Research Laboratory.

During the 1960s, Ashley organized the ONCE Festival, the annual festival of contemporary performing arts in Ann Arbor which, from 1961 to 1969, presented most of the decade’s pioneers of the performing arts. He directed the highly influential ONCE Group, a music-theater ensemble that toured the United States from 1964 to 1969. During these years Ashley developed and produced the first of his mixed-media operas, notably That Morning Thing and In Memoriam...Kit Carson. His principal income during this period was derived from films and film music; he was employed free-lance by professional producers to provide sound tracks for industrial, educational, advertising and feature films. He also produced original music and sound tracks for several art films by George Manupelli.

In 1969, Ashley was appointed Director of the Center for Contemporary Music at Mills College (Oakland, California), where he organized the first public-access music and media facility. From 1966 to 1976 he toured throughout the United States and Europe with the Sonic Arts Union, the composers’ collective that included David Behrman, Alvin Lucier and Gordon Mumma. With the support of the Rockefeller and Ford Foundations, Ashley produced and directed, Music with Roots in the Aether: video portraits of composers and their music, a 14-hour television opera/documentary about the work and ideas of seven American composers, which premiered at the Festival d’Automne à Paris in 1976 and has since been shown worldwide in over 100 television broadcasts and closed-circuit installations.

In 1980, the Kitchen (New York) commissioned Perfect Lives, an opera for television in seven half-hour episodes. After developing the opera in live tour performances throughout the US, Canada and Europe, Perfect Lives was co-produced with Great Britain’s arts network, Channel Four. First broadcast in Great Britain in April 1984, Perfect Lives has since been seen on television in Austria, Germany, Spain and the United States and has been shown at film and video festivals around the world. It is widely considered to be the pre-cursor of “music-television.”

Commissioned works include Concrete / The Old Man Lives in Concrete (2007-12), commissioned by Performing Artservices, Inc. for his ensemble, with funds from the Multi-Arts Production Fund at Creative Capital; Celestial Excursions (2002), for his ensemble, by the Berliner Festspiele/Hebbel-Theater and Performing Artservices, Inc. as part of the national series of works of Meet the Composer/Arts Endowment “Commissioning Music/USA”; Dust (1998), by Kanagawa Arts Foundation and Dorothea Tanning; Balseros (1997), with a libretto by Maria Irene Fornes,by The Florida Grand Opera, Miami-Dade Community College and the South Florida Composers Alliance (based on the experiences of the Cuban “rafters”); When Famous Last Words Fail You, for voice and orchestra, commissioned by the American Composers Orchestra (premiered on December 7, 1997); Your Money My Life Good-bye, commissioned in 1997 as a radio production for Bayerischer Rundfunk, in English and German; Now Eleanor’s Idea (1993) and Foreign Experiences (1994) for his own opera ensemble, with funds from the Mary Flagler Cary Charitable Trust and Meet the Composer’s Lila Wallace-Reader’s Digest Commissioning Program; Van Cao’s Meditation (1992), for pianist Lois Svard; Outcome Inevitable (1991), for chamber ensemble, by Philadelphia’s renowned Relâche Ensemble; Superior Seven (1988), for flute with orchestra and chorus, by Barbara Held and the Bowery Ensemble; eL/Aficionado (1987), opera, by Mutable Music for Thomas Buckner; Atalanta (Acts of God) (1985), by the Museum of Contemporary Art, Chicago, for its anniversary celebration; Odalisque (1984), for orchestra, solo voice and chorus, by The Arch Ensemble, Musical Elements, Alea III, and The Contemporary Chamber Players of the University of Chicago; Music Word Fire (1981), for television, by Channel 13/WNET.

Ashley has provided music for the dance companies of Trisha Brown (Son of Gone Fishin’, 1983), Merce Cunningham (Problems in the Flying Saucer, 1988), Douglas Dunn (Ideas from The Church, 1978 for Dunn’s “Coquina”) and Steve Paxton (The Park and The Backyard for “PA RT”; Automatic Writing and Dust for “Night Stand”).

Ashley was the 2002 recipient of the “John Cage Award for Music” from the Foundation for Contemporary Performance Arts, and a 2008 recipient of the American Music Center’s “Letter of Distinction.”

Ashley is working on two new operas: Quicksand, an “opera-novel”, which was released in novel form by Burning Books in 2011, and Crash, which will be premiered at the 2014 Whitney Biennial. 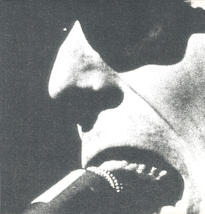 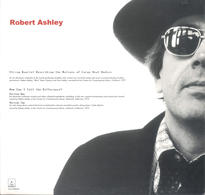