The man carrying his body, his reels of film, his bag and his old Nikon, is Boris Lehman, he’s also Sisyphus, Jesus Christ, and Ixion as told by Alfred Jarry in La Chandelle Verte. An essay on heaviness and lightness. The carrying man would like to fly, vanish into thin air, into light. When he meets another machine-man, who carries electronic pictures, his dream will come true.

"Boris Lehman, Man carrying
The films of Boris Lehman are carriers. They carry us. And in Homme portant the whole weight of Lehman’s cinema is carried by a few kilometres of celluloid.
Though it’s also a metaphor, this carrying makes literal sense: carry one’s film-making as one carries one’s cross, on Jerusalem’s steep slope,a calvary of 24 images per second and 24 Stations of the Cross, showing literally and also figuratively (transfiguration), the film-object transferrred to a different state, shifted, shunted, decentred, ceaselessly moving as part of a fundamental questioning of self and film-making.
Carry.
Carry what is borne within us?
Boris Lehman carries everything before him: by the movement of camera and film alike we are transported (in our mind’s eye at least), carried away, transformed and transfigured, altered, switched from alter ego to ego alter. This film moves mountains of preconceived ideas about seeing images and hearing sound.
Walking is working and vice versa. Through a walking self-examination (Lehman even made a version of Leonardo da Vinci’s ’autoscopic’ machine to test his theory) we are carried away, deported, placed under metaphysical observation. Beyond the metaphor there is a meta-film, the auteur’s own meta-language of cinema; a metaphysical projection with Plato’s cave as screen (meta originally means what follows, comes after, what transpires after the physical or conceptual movement) inviting us to observe the metamorphosis in ourselves, how we change after seeing the change in others, after the film has come and gone. We are transported. The Man carrying carries us.
He carries for us the weight of the films, the weight of time, the weight of space traversed. It’s a transfer, a transposition, a transportation from concrete to abstract, from matter to energy, the march of time in an endless repetition of the mechanics of walking, step by step, taking us to another place or another mental space, into another state, never the same, always displaced, carried onward.
Carried along by the constant yet singular movement of Lehman’s technique, we are also converted into walking spectators, carrying spectators who finally come of age, acting out their own existential adventure.
In this sense, the film also unrolls, literally, in the projection room.
It ends with disturbing authenticity and depth, throwing us into the searing experience of ’videoportation’ or ’teleportation’ : this is a film that announces the end of film as physical matrix, the end of cinema as we know it. We see film being literally devoured by electronic and digital imagery, with the subject itself - the Lehmanian subject - making a final attempt to get away, to save its skin, yet carried onward, sucked back willy-nilly into the film’s ever-shifting centre.
The march is thus : each imbalance is righted, producing another equilibrium, another step forward.
The film is thus, the cinematograph likewise : each still image is overtaken, each is displaced to embrace the movement of thought, the forward march of ideas, the movement of the Carrying man, the carrying movement of the Man, the movement of the Man carrying.
Displace, decentre the object (of the film) so as better to centre and identify the subject (Man as subject); that is the true philosophical value conveyed by Boris Lehman’s Man carrying.
This is a value for humanity, which again and again loses and then recovers its balance, so that come what may it will always revert to being a matrix for possible advance.
The man carries Man.
He is the Man carrying."
(Jacques DAPOZ, Brussels, July 2003) 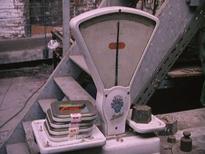 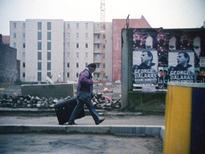 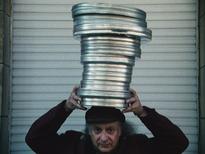 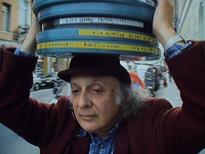